The Year of Disruption: Takeaways From Financial Expert Marci Rossell

Is it even possible to predict a recession? Leading financial expert and former chief economist at CNBC Marci Rossell, Ph.D., has the answer: it’s difficult at best. “Recessions are caused by factors that are inherently unpredictable…by disruptors you don’t even see coming,” Rossell warned. As keynote speaker at the M. Holland Business Conference, Rossell discussed the state of the economy as well as current threats that could lead to economic disruption. 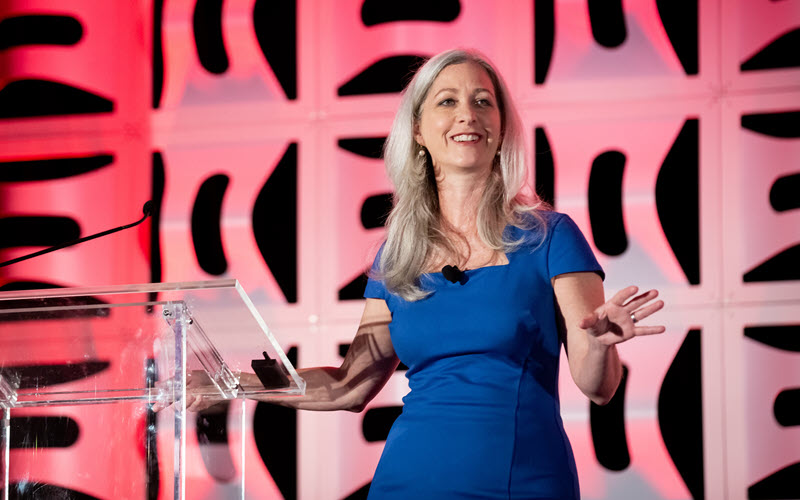 Each year, Rossell chooses one word that she thinks encompasses the state of the economy. This year, she chose “disruption,” and explained the two types. “There’s good disruption, and then there’s its evil twin,” Rossell said. Good disruption hits one specific industry. It is generally technologically-driven and inspires long-term economic growth. For example, Uber and Airbnb brought much-needed disruption to the transportation and hospitality industries, as well as positive changes for consumers and the overall economy. This type of disruption isn’t likely to influence a recession. Instead, Rossell says, it’s good disruption’s evil twin we need to watch. “It tends to be short term, is driven by bad economic policy and is also responsible for economic slowdowns, downturns, and even in some cases, recessions,” Rossell said.

What evil disruption threatens our currently expanding economy? Are we headed toward an economic recession? Marci argued why talks of an impending recession are likely more hype than reality. “Economic expansions don’t die of old age, they’re murdered by bad policy,” Rossell said. She revealed the top three policies she believes are responsible for disrupting our economy and why they are or are not a concern for recession.

In June 2016, 51.6% of citizens in the United Kingdom voted to withdraw from the European Union. However, it wasn’t until March 2019, the first official government deadline, that the world realized the U.K. did not have a withdrawal plan. What was the problem? “I think when the British people voted to leave the EU, they thought they could retain all the benefits—free movement of goods, relative free movement of capital, London as the financial center of Europe—and none of the cost,” Rossell explained.

When the country’s next deadline hits this October, no-deal Brexit could become a reality. While some say it could cause economic turmoil, Rossell disagrees. She sees Brexit as the next Y2K, arguably one of the biggest build-ups and let downs in history after nothing happened when the clock struck midnight on Jan. 1, 2000. “When people see a problem coming, they take steps to prepare for it,” Rossell explained. “Through their preparation, they mitigate the outcome.” For Brexit, companies at risk for negative repercussions have likely already taken steps to lessen the damage.

In January 2018, the trade war with China began after the U.S. imposed tariffs on two relatively insignificant imports: solar panels and washing machines. However, it wasn’t until months later, when the U.S. also placed tariffs on imported Chinese aluminum and steel, that U.S. citizens began to take note. The war further escalated when, in response, China put tariffs on soybeans, a major U.S. export used to feed China’s livestock.

The impacts of these tariffs bled into 2019 and affected nearly half of all traded goods between the U.S. and China, which Rossell agrees is a drag on economic growth. However, the exchange of goods is just one portion of our trade deficit with China. “We produce the most attractive stocks, bonds, and real estate in the world…no one can produce debt the way we do,” Rossell said. Even though China is the world’s second-largest economy, its national GDP per person is significantly less than ours. In the most basic of terms, the U.S. is still richer than China, and Americans can afford to pay more for goods.

So, in the end, is this trade war going to help or hurt our economy? Rossell said this trade war “is not a fight worth having.” However, it’s not significant enough to cause a recession.

According to Rossell, the only thing that has proven powerful enough to cause a recession is monetary policy. The recession in the early 1980s caused the Federal Reserve (Fed) to aggressively raise interest rates to stave off inflation from the 1970s. Some mortgages reached 18%, which led to a savings and loan crisis. Years later, after the Great Recession in 2008, the Fed dropped interest rates to 0% to help the economy level out. When the financial and bond markets remained unresponsive, the government then applied quantitative easing and bought and sold $4 trillion worth of bonds and mortgage-backed securities to get money in the hands of the people. The Fed held onto these bonds for a decade, but in 2018, they slowly began to sell the bonds by soaking $50 billion out of the system each month. When they pulled the money out of the economy (quantitative tightening), they strengthened the dollar and, for the first time since the financial crisis in 2008, money stopped feeling “free.”

Some people began to worry a recession would soon follow. “Even if the U.S. cut interest rates…there is no case for a weaker dollar,” Rossell explained. “There’s a real case for a weak euro, our main competitive currency, but not the U.S. dollar. I think if this quantitative tightening were going to cause a recession, it would have already done so by now,” Rossell said.

Our economy has reached its longest economic expansion in recorded history, yet Marci expects we won’t see a recession in 2019. We can instead look forward to a predicted economic growth rate of 2.5%. In the meantime, let’s hope good disruption’s evil twin doesn’t deliver an unexpected monetary policy sending the U.S. reeling any time soon.

There’s No Time Like the Present to Finance Your Plastics Business
A “Grande” Day for Coffee Regarding Proposition 65
What’s Next In 3d Printing? Mployees Share Key Takeaways From RAPID + TCT 2019
Introducing M. Holland’s Recently Promoted Executives
Everything You (Never) Wanted to Know about FDA-compliance but Were Afraid to Ask
Mployees Celebrate Earth Day Worldwide
Fireside Chat: How To Attract And Maintain A Diverse Workforce In The Plastics Industry
M. Holland Once Again Named Among Best Places To Work
Encyclopedia Brown And The Case Of The Missing Prop 65 Statement
2019 International Women’s Day: Shining A Light On The Women Of M. Holland
Exciting Changes Ahead For M. Holland’s Wire And Cable Group
Upcoming Fireside Chat: Attracting And Maintaining A Diverse Workforce In The Plastics Industry
2019 Market Trends Series: Rotational Molding And Color & Compounding