It’s been high and deadly serious drama for Puerto Rico Mployees since Hurricane Maria scored a direct hit on the island with 165-mile-an-hour Category 5 winds and some 40-inches of rainfall. The island of 3.4 million people was still recovering from a sideswipe a week earlier from Hurricane Irma.

Commercial Manager Tracy Coifman, who sold his family business to M. Holland in 2016, is a lifelong resident of Puerto Rico and has lived through no fewer than six hurricanes in his lifetime. None matched the fury of Maria. His email and text reports on the experience tell a compelling story.

On Tuesday, September 19 at 9:21 p.m., he posted his last email before the storm struck as he hunkered with his family:

“Likely lose cell towers. I have fiber optic — line may have luck with internet and WhatsApp…”

He next connected on Wednesday, September 20, at 9:46 a.m. as the storm passed. His condominium was partially flooded and littered with leaves from the trees six stories below:

“My family is safe, including my mom and sister. Worst of the storm is over. Have not heard from rest of staff, and they may not have cell service, battery, and/or internet. Good news: saw one report that no loss of life been reported yet. This will unfortunately likely change due to severity and we still have flash flood warning until Friday.

“Streets and properties are a mess and damaged (Including mine) and cleanup will be much slower than IRMA since Island wide.”

That afternoon at 3:22 p.m., he emailed some photos of the devastation in San Juan near his home: 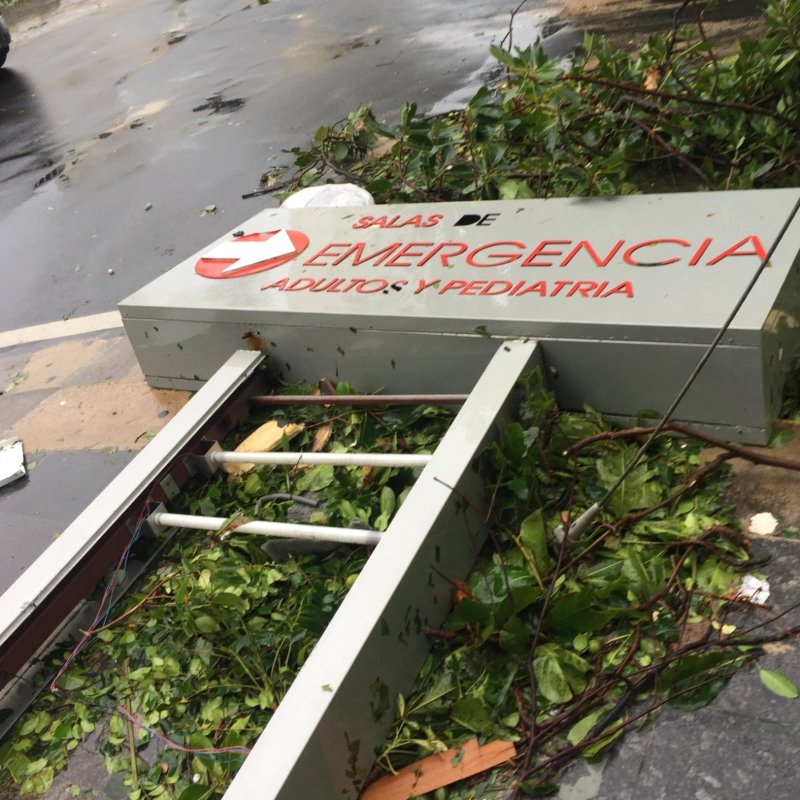 “If you see all the leaves on my balcony in water, blown up from street level six floors down.

“No cell service, and if photos of downed trees in the city any indication, the outskirts where rest of staff lives will be far worse…

“Still no response from staff. Will keep you well informed as always.”

At 6:44 p.m., he forwarded a relieving update for his colleagues in Mexico and stateside, who were anxiously following the news from Puerto Rico:

“All PR staff safe and accounted for.

“It’s bad all over. (Daughter) Andrea said to me as we walked around ‘This is what it would look like after Zombie apocalypse.’

“People like us walking around not talking or just whispering.

“Good news is everyone is safe.” 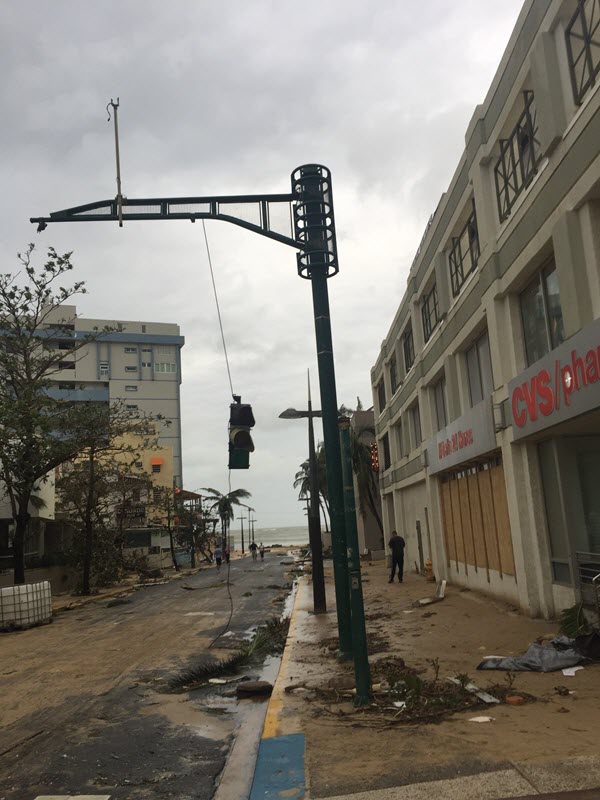 On Thursday, September 21, at 11:54 a.m., he sent more encouraging news, but against a backdrop of devastation:

“Simply not easy to get to.”

“Devastation just jaw dropping. No leaves on trees on mountains. It will grow back greener and lusher within a year (but) still shocking to see.

“Roads are impassible in most areas.

But by later that morning, his assessment grew more sobering:

“Most of island has no cell service, no cable, no Internet, 100% without power and under curfew. Looting criminality desperate.

“No food anywhere … First time in my life the 24-7 supermarket by my house is closed ….” 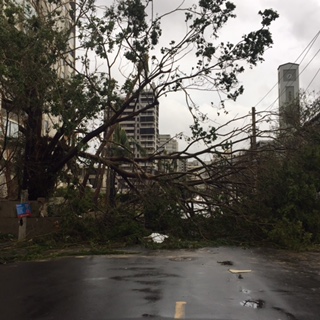 Still later on Thursday, he emailed:

“I cannot stress how bad it is. Nothing is open, hard to travel, some areas impassible due to trees and or flooding.

“Government will cease to be functioning for 72 hours. Some municipalities incommunicado. We are under a curfew – both crime and no power makes night dangerous. Looting has occurred.

“Generators and fuel beginning to fail from extended use from IRMA.

“If power is off to island for extended time, we have no water. Taking one day at a time.” 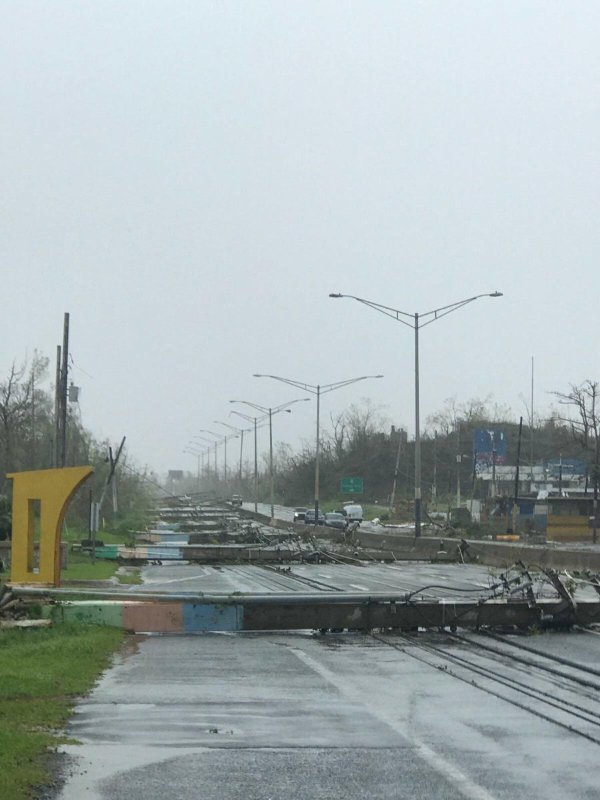 With the following email still later on Thursday, the broader M. Holland family began to take action to help. M. Holland Latinoamérica Director General Xavier Lebrija and the Human Resources team in Northbrook began to make plans to evacuate their Puerto Rico colleagues, while a number of Mployees in Mexico and the United States offered to help house them:

“I was just informed by our condo administrator that there is no diesel fuel on the island. FEMA is confiscating it all for first necessity use. Hospitals and pharmaceutical plants.

“We do not have water from street so buildings on tanks like ours will run out unless they can get electrical and water reconnected in reasonable time, and that looks unlikely.

“I am looking into alternatives to evacuate my family since I have family on mainland. Rest of the staff safety is my concern.

“Plan for worst, hope for best.”

“Tracy, As we spoke a while ago, please advise if you and our people have ability to evacuate the island… If you can find a way to leave, we will figure a way to manage a living/working situation for any of our people who wish to take advantage of it. I know it will be difficult for some who have extended families etc. that cannot move. But we will keep all options on the table if any opportunities arise.”

“Eerily quiet in city (San Juan) this afternoon. No chainsaws, nor sirens, and military helicopters heard in morning as reality sets in. 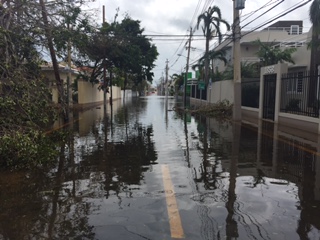 “Few ATMs work & have lines. Supermarket lines. Everyone has umbrellas. Unbelievably hot with sun beating down. No shade anywhere since no trees or leaves left on ones standing … The airport is opening up tomorrow, but cannot get there from here; highway flooded and impassable for now as informed by police. The hospital by our house had three generators fail and got one up and running, no AC, terrible conditions.

“The few restaurants open close at 5:00 p.m. due to 6:00 p.m. curfew. Curfew extended to Sunday. All hotels are closed … Food distribution companies having problems stocking without diesel.

“It’s only day two after storm and feels like two weeks since we turned off our generator to ration fuel.”

But by Saturday morning, with massive disaster relief efforts taking hold, the news begin to change for the better:

“Caribbean Business reports some good news that 80% of gas stations will be hopefully supplied regularly by this Tuesday (Refueling of stations will begin today, Saturday). This also means diesel supply for generators should also be released soon….

“Will try to confirm today when diesel and natural gas can be obtained to keep generators running (Office has two generators with both fuels).

“FEMA open for claims & has mobile app and online options. FEMA is also receiving requests via telephone…. Agency staff will also visit affected areas so residents can submit their aid requests on site. FEMA staff is also available at the Puerto Rico Convention Center, which serves as the government’s central command center.

“I hope to reach as many staff as possible (temporary cell phone towers were to be operational today) and explain FEMA process who this may be first Hurricane whose home has been damaged and FEMA eligible, in addition to conveying option to leave Puerto Rico until dust settles.

“More good news. … (News reports say that) some transmission structures collapsed … (but) there was no severe damage to electric plants.

“In summary, I think this information gives tremendous hope & I confirmed with FBI last evening that things within control so far (or this type of major catastrophe) and help continues to arrive and be deployed.

“My main concern now for all employees is when will clean safe water return. You can live without electricity for long periods of time, not water. Schools cannot return without water and received word last evening that one school advised a return date of Oct 2.“

As of Sunday morning, September 24th, AT&T’s wireless network was down throughout the Puerto Rico, making communications even more difficult. Tracy was planning to take his family off the island and then return to help other Mployees and plan to reopen the office as circumstances allow.