When you live on an island like Puerto Rico, you are particularly conscious of the health of our oceans.

And, according to Tracy Coifman, business development manager for M. Holland Latin America, every little effort makes a difference. Tracy has been a part of the plastics industry for over 20 years and takes note of plastics in everyday life. Which is why in 2016, when he and his wife noticed a group setting up polyvinyl chloride (PVC) pipes and caution tape along the beach, they naturally stopped to find out more. The group was 7 Quillas, an organization dedicated to the preservation of leatherback turtles, and they were marking the location of turtle nests to help protect them from beachgoers. Tracy and his family have been volunteering with the group ever since.

This December 1st, Tracy and his family participated in the 7 Quillas Ocean Park Challenge. Over 600 people volunteered to remove trash along Ocean Park Beach, located in San Juan, Puerto Rico. The community service event focused on conservation and education to promote the preservation of our planet’s oceans.

Recognizing the Importance of Healthy Oceans

The New York Times reported that 8 million metric tons of unrecycled plastic ends up in our oceans annually. This statistic is especially crucial for Puerto Rico. The oceanfront is integral to the island’s economy, providing revenue from fishing, tourism, marine transportation, and more. In fact, coastal activities are approximately “three to eight times greater than in the U.S. as a whole,” according to the National Oceanic and Atmospheric Administration (NOAA).

The 7 Quillas gathering was sponsored by environmental groups and Warner Brothers Latin America, which took the opportunity to tie beachfront philanthropy to their upcoming premier of the “Aquaman” movie.

This is why efforts like the 7 Quillas cleanup are so meaningful. After the cleanup, volunteers gathered on the beach to form a human chain in the shape of a leatherback sea turtle. A drone captured the record-setting task along with other panoramic views of the island. Coifman said the clip highlights how Puerto Rico has rebounded from Hurricane Maria in 2017. “A bright side to the darkness of hurricanes is that they are nature’s pruners,” he said. “Everything now is lush and beautiful, and there is no better time to come to Puerto Rico.” 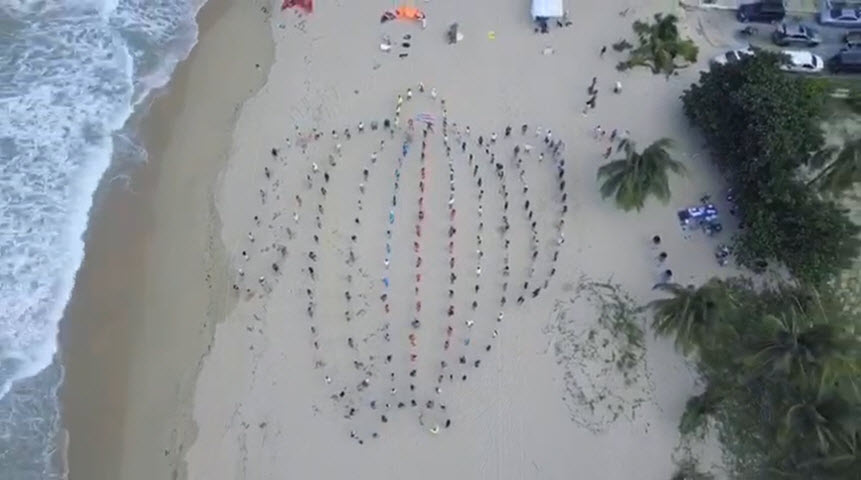 7 Quillas organized a leatherback turtle formation, the largest ever recorded.

Sustainability is an important global issue. “As global population grows, our demands on natural resources increase,” Coifman said. “Sustainability is about protecting our generation and life on the planet as we know it.” 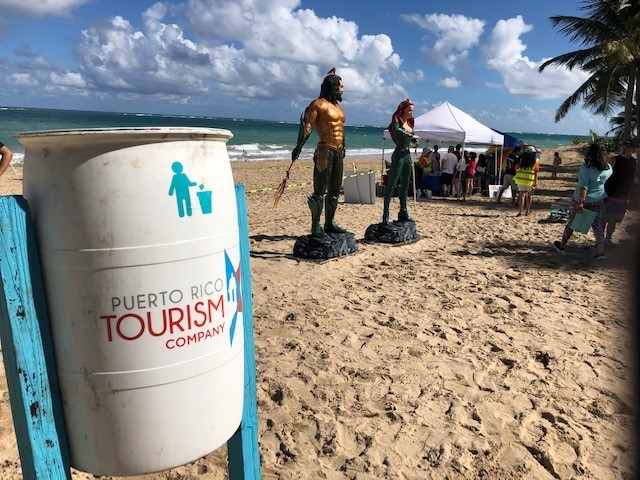 This garbage bin on Ocean Park Beach survived Hurricane Maria and is built durably to reuse and recycle.

With plastics always top of mind, Tracy noted that certain plastic products can actually support volunteering and cleanup efforts if used responsibly. Recyclable garbage bags, plastic refuse bins, netting to catch debris—these materials and more can assist with making our beach ecosystems healthier. Coifman said it’s an excellent reminder for others to avoid littering and “leave no trace.” Coifman noted “these events just keep reinforcing the idea to be diligent when it comes to maintaining our beaches.”

Hilda Benitez, founder of 7 Quillas, noted the role plastics plays in her organization’s efforts. “Our group uses plastics in the conservation of leatherback turtles and their nests, including PVC pipes, polyethylene caution tapes, and polypropylene ropes that we reuse every nesting cycle,” she said. “The key to sustainability is education, so plastic waste does not end up in our oceans.”

If you enjoyed this article, please check out some additional posts