It has been a full week since Hurricane Maria hit Puerto Rico, causing extensive damage and incapacitating the Island of 3.4 million. However, to the residents of Puerto Rico, including our own team of nine, it has seemed far longer, as the endless days seem to run one into the other. As acknowledged by Tracy Coifman, M. Holland’s Commercial Manager in Puerto Rico, “One day at a time. Feels like Ground Hog Day with Bill Murray.”

The M. Holland office has become a respite to our Mployees and their families. Following the hurricane, Tracy posted a sign to the office inviting staff and families to take advantage of air conditioning and electricity. Thankfully, with temperatures topping 90 degrees, the AC has held strong. Communications, however, remain an issue for the team with still no phones or internet access. Cell service has been limited, yet available intermittently enough for the team to communicate via WhatsApp. 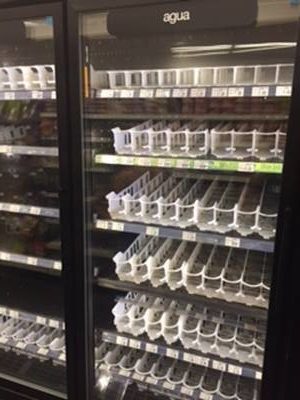 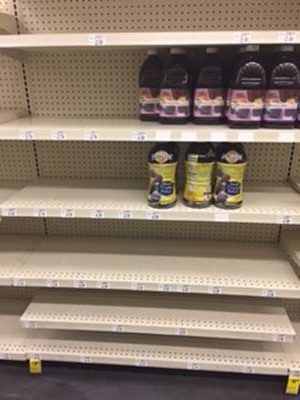 Lines to gas stations, banks and grocery stores persist. Some of our staff members stand in lines with waits as long as four hours, every other day, just to obtain $20 of fuel for their generators. Shelves and coolers are woefully empty, especially of staples such as milk, eggs, water and bread. (From photo’s forwarded by Tracy, though, it would seem prune juice is still available.)

The quality of life has become increasingly strained for those remaining in Puerto Rico. According to Tracy, “Hospitals not accepting any new patients, so things deteriorating. Maybe one step forward, two steps back before things stabilize. Still trying to put positive spin on this.” Consequently, many of our staff have made the difficult decision to temporarily evacuate. But finding a way off the island has been a challenge with the airport only partially operational and roads on the island still impassable in many areas.

As of Wednesday afternoon, M. Holland and M. Holland Latinoamérica human resource staff had secured precious plane seats and made hotel reservation for a number of our Puerto Rico Mployees and their families to relocate temporarily in Greater Chicago. Tracy sends this message to their M. Holland family to the North: “Please receive all PR staff (with) big hugs (Latin Culture) the MH way we always do. Trying to work my way too. Hope to see you all soon and will fly back to Puerto Rico regularly to get office back up and running.”