One week ago, nearly half of the M. Holland Puerto Rico Team and their families left their homes in-and-around San Juan, and made their way to the airport for evacuation back to the mainland. That day proved to be a very long and trying 24 hours for our travelers as they joined hundreds of other passengers in an uncertain waiting game.

First one delay… then another. The group camped out on the terminal floor, armed with their cellphones, waiting for updates on the next flight to Chicago.

But, after several hours of waiting …success! Our weary travelers boarded the plane headed for Chicago.

[Tracy Coifman and Milton Candelaria, surrounded by smiling family members, give a thumbs-up during boarding]

Thankful to have finally arrived, Tracy Coifman, Commercial Manager of M. Holland Puerto Rico, emailed the team “The Eagle has landed! We will be coming in for lunch tomorrow!”

“Happy and relieved that you made it safely,” replied Xavier Lebrija, General Director of M. Holland Latino America.

Everyone at M. Holland was thrilled to have their Puerto Rican family to visit while things normalize back home. 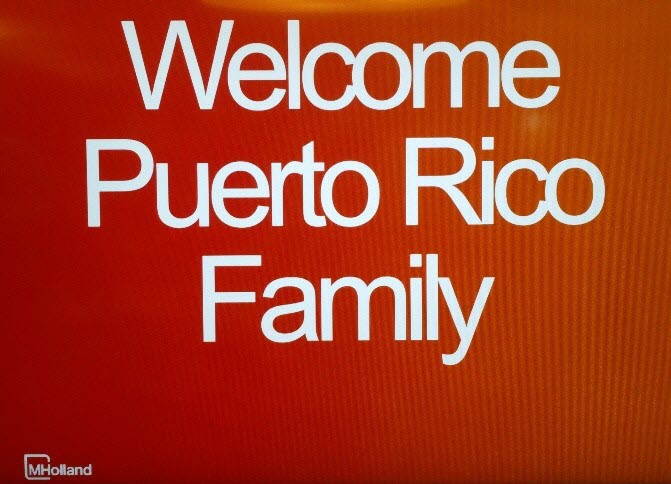 Meanwhile, in Puerto Rico, several of our M. Holland team remain to hold down the fort. In the coming weeks, Tracy plans to fly back to the office to check in, as there have been reports of intermittent electricity, internet and phone service. Based on these visits, he will then decide when the office can be officially reopened. In the interim, the Puerto Rico team will run operations from M. Holland’s Northbrook, IL headquarters.

Tracy reflected on his family’s exit of Puerto Rico with a touch of melancholy and a promise to return: “We will be back bigger and better. What does not kill you makes you stronger. Who said that never been through CAT 5 direct hit either.”

Click here to learn more about the Flamboyan Organization and their relief efforts.